I need to split into at least six people!

Once again my project must-do list is growing and growing. One idea after another hits and I want to make them all. Now!

Well, we know that won't happen, but if I don't set some goals and pace myself nothing at all will be accomplished. That's where all those years of teaching school come in handy. Teachers know how to set goals and stick with schedules and time frames. We work with lesson plans and deadlines every day in the classroom, and some of that absolutely carries over into everyday life. I do know how to get organized and I'll definitely try. No guarantees of success, but well give it a go.

For now, I have three primary goals for my sewing activities.

A. Post a weekend blog every week!
So far, so good! 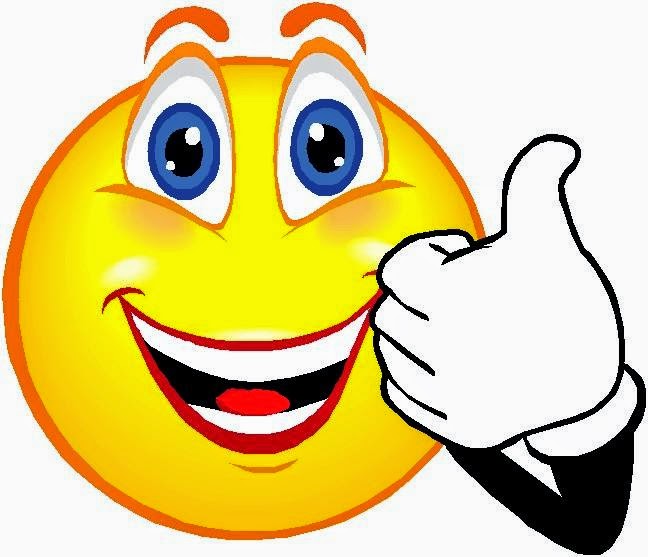 B. Organize my "stuff" between projects.
Confession: I try, but organization doesn't come naturally to me. I keep the rest of the house pretty well organized, but I get so busy and so focused when creativity is flowing that I don't even notice the mess piling up in my work area. That makes this goal even more important. It's either pick it up or have no work space left.

Since I have just today completed the next pair of blocks in the garden quilt along, and the extra fabric for my 9-patch quilt is due to arrive tomorrow, I'm right between two projects. This is the moment for organizing.

I gathered up all of those leftovers that come in so handy: 10" layer cake pieces, the many little 5" charm squares, the long, 2"-3" strips of this and that, and I cut the tiny bits and pieces into usable sizes and shapes. 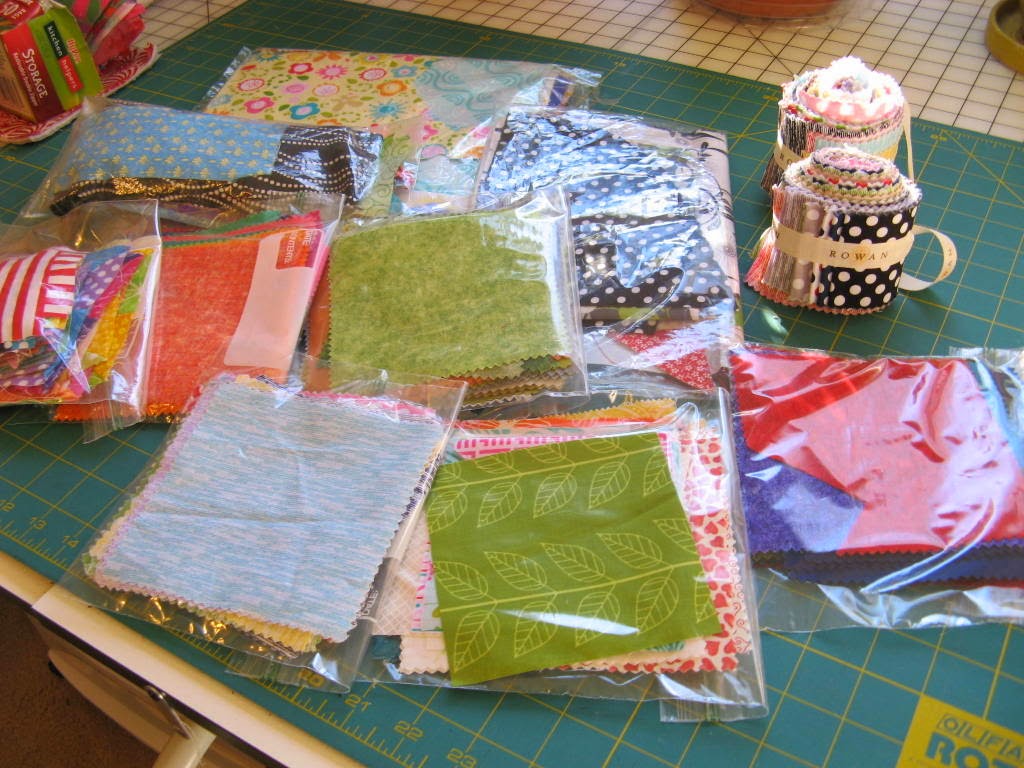 Where did I get so many itty bitty scraps? My word! Oh, well, it doesn't matter where they came from. The important thing is that they are all sorted and organized into ziplock bags where I can see what's what, and the bags are in my scrap basket. I think I'm ready for the next project.

C. Plan the work load one month at a time.
If the work is cut up into smaller chunks it's a whole lot easier to finish on schedule. Planning it out also helps to keep me on track so I don't jump onto ten other projects before the first one is completed.

So, these are my objectives for the last two weeks of January:

1. Finish the pattern for next pair of quilt along blocks. The blocks are made, but the pattern isn't done. I'll take care of that next week. 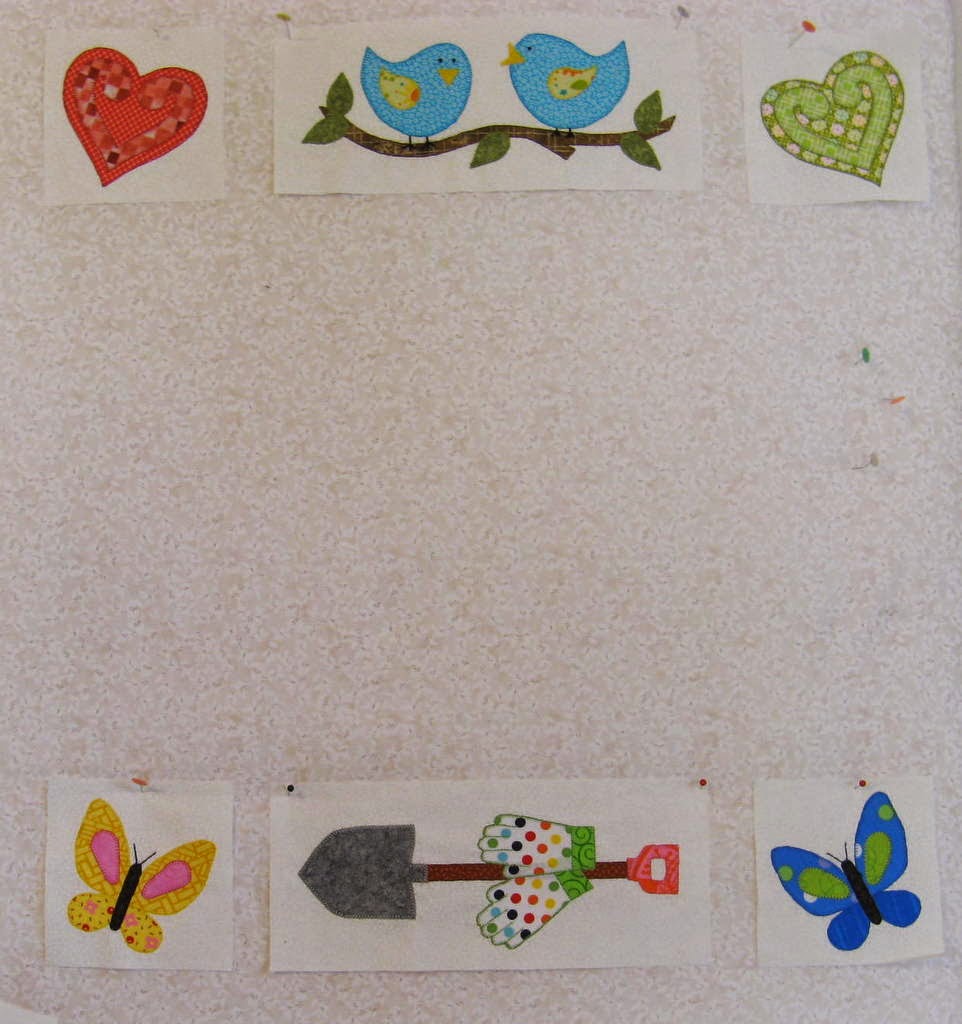 It's looking good on my design wall! I may shuffle the hearts and butterflies several times before it's done, but I'm liking it so far.

2. Finish the nine-patch quilt. I'm getting excited about this one. I've been waiting for the extra fabric to arrive.  The fabric is from last year's line, so it isn't available in the usual local or online quilt shops. I had to go hunting for it. Once again, it was eBay to the rescue. My plan is to complete the quilt top next week and do the quilting and binding the following week. The pattern will wait till next month.

Nine nine-patch blocks are ready and waiting for further action. These are going to change so much before I'm done!! I am grinning from ear to ear as I imagine how this little quilt will turn out. Fingers crossed that it doesn't do something unexpected and awful! 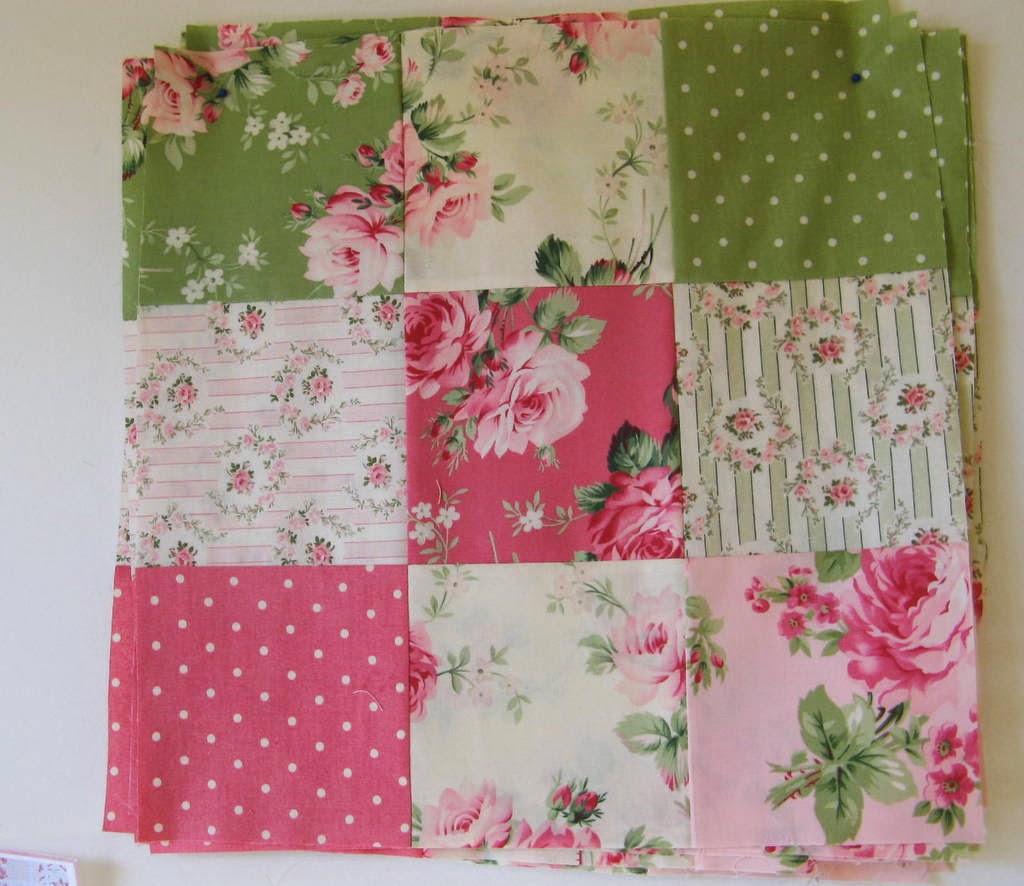 I do have an idea in mind, and that's the main thing. Actually, I have 20 ideas in mind, but I've chosen just one for now. That was hard! I'm not giving it away quite yet, though!

4. Make two new name quilts for the folks at my daughter's office. That means I'll have to make one each week.

I've completed two of eight. Only six to go! I hope they'll be ready by the end of February. Valentine's Day would be nice, but I'm not going to push my luck.

Focusing on January's goals right now! If not, I'll be adding in more work than I can handle.

5. Work on sketches for at least half an hour every day.

That's easy. I pretty much do it now anyway. It fills the after dinner time so much better than television. (Except for "Downton Abbey"! That's the only show I'm following right now.)

Ouch! I might just have set myself up for failure! No, no, there are only two weeks to go. I can do this. Of course I can. I hope.

There are other goals to be accomplished as well. I've enlisted my friend, Anne, to help me keep on track. I definitely need to exercise more! A 20 minute walk every day shouldn't be all that hard, but I can't seem to get it done even though I have a treadmill for the bad weather days. I spend way too much time on the internet, too. Anne has goals as well, so we will be each other's watchdogs. Every evening we'll check in with each other by phone to quickly go over our checklists. 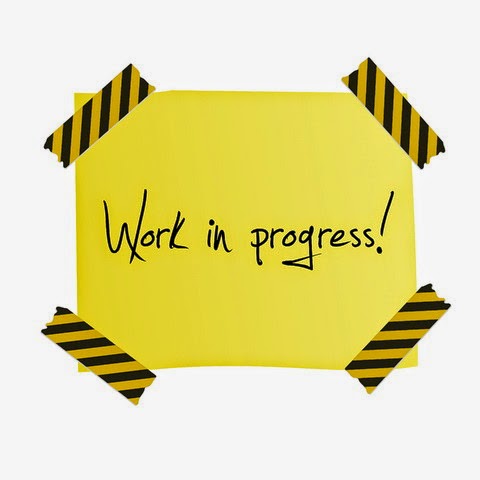 And that's it for January.

And have a super duper lovely and productive week!