A Christmas Elf and a Trick or Two

I always have fun with my sewing, but this little guy was especially delightful to make. It was a special request, and I'm so glad Sue asked for an elf!

It started with a quick pencil sketch. 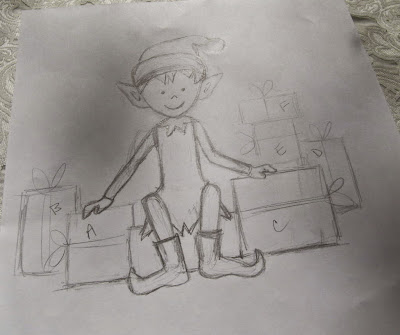 As always,  I took it to my husband for his opinion.  When his face broke into a smile I knew it was okay.

I made the templates in the morning and spent most of the afternoon choosing fabrics. Lots of Christmas prints and a small scrap of a "flesh" colored solid. That "flesh" color could be anything on the spectrum from pale cream to deep ebony, but I chose the color that matches my own family for this one.

"Where did you find the flesh color fabric?" my friend Midge, asked.

Here are the instructions:

1. Get out bowl that is sufficiently large to hold your fabric with room to spare and place 2 teabags into the bowl for every cup of water that you will need to completely immerse your piece of fabric.

2. Pour boiling water over the tea bags and let it steep for about 10 minutes. 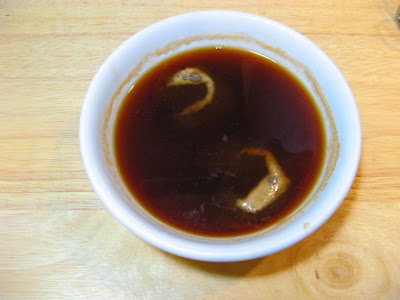 3. Drop the fabric into the tea. Swirl it a bit to ensure an even stain. If you need to leave the fabric unattended, make sure that no pockets or air are lifting sections of it to the surface. 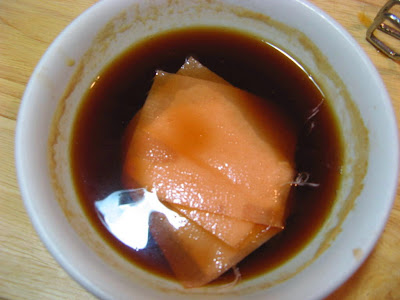 4. When you think the fabric might be about the right color, rinse it in cold water and dry it. It will lighten as it dries. If the color isn't dark enough, put the fabric back in the tea bath for a bit longer. The fabric can be made several shades darker with extended time in the tea.

To achieve very dark stains you may need to reheat the tea with the fabric in it. That's what I did with the darkest sample in the photo below. It took about half an hour to reach that lovely, nut brown, flesh color.

Faces made of real flesh are not a solid color! Color adds health and beauty to a face. Why else would we need makeup?

My flesh colored fabric needed to look healthy and alive, too! Instead of makeup,  I added color with colored pencils and embroidery floss. I started with a red pencil and a brown one.

Using a blunted red pencil I added a soft blush to the cheeks, the inner parts of the ears, and the nose. After that I added definition to the ears and nose with a very sharp brown pencil. I felt like I was a little girl again, coloring in my coloring book! Definitely playtime for me. 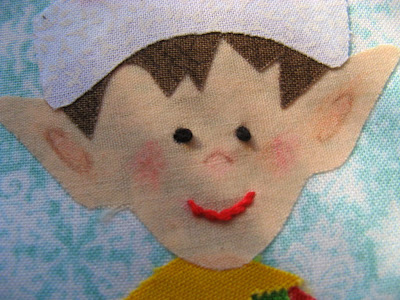 The eyes and mouth were embroidered, but they really don't have to be. Drawing them with a fine tipped magic marker is just fine. Just make sure to test the markers on a small scrap of your fabric first! Sometimes the markers will bleed into the fabric and ruin it. 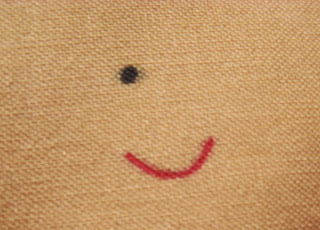 Some of the pieces in this pattern are pretty small, so they were a bit tricky to place. First I planned my layout, then I used a straight pin to get the pieces where I wanted them. I found that it was best to fuse one layer at a time to keep the pieces from slipping out of position under the iron. It helps enormously to avoid ironing back and forth on them. Simply press the iron straight down on top of the appliques and apply pressure. 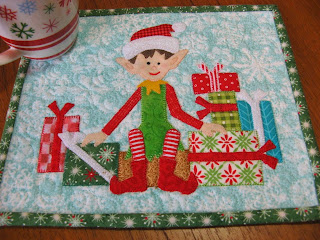 I'd be grinning too if I had my Christmas packages all wrapped and ready to go!

And now it's time to move on to the next project. If I'm not mistaken, somebody wanted a table runner. Back to the sewing room!

Email ThisBlogThis!Share to TwitterShare to FacebookShare to Pinterest
Labels: Christmas 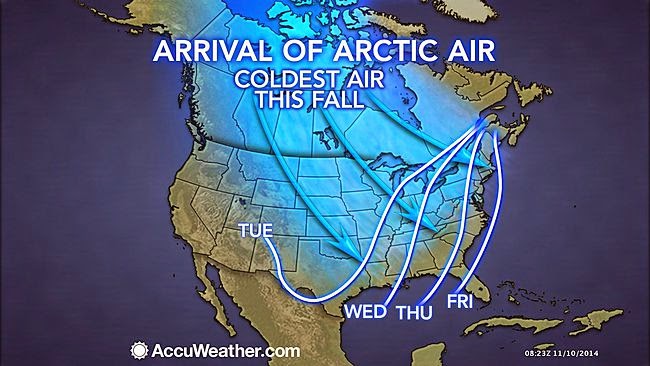 The Polar Vortex has arrived!

Yesterday I was out running errands in the bitter cold. No fun at all! Today, though, I didn't have to be anywhere so I could stay warm and focus on doing things indoors. Goodness knows, there is always plenty to do around the house!  There were the typical morning chores - make the bed, get dressed, take care of laundry, think of something to fix for dinner, and such. Then I planned to stitch the binding onto my latest mug rug and work a bit on the pattern. That was all.

Wow! There was time to do some real cooking for a change! It seems like I've been pulling food from the freezer and heating our dinners in the microwave a lot recently. I considered dinner while I stirred my morning oatmeal on the stove. What to cook on a day like this? It would have to be comfort food - something hot and flavorful.

I checked quickly for ingredients on hand. I had everything needed for chili. Perfect. A super choice for a cold, wintery day. I could make a great, big old pot of it, enough for two meals and some for the freezer, as well.

Since I was cooking chili, I had to bake cinnamon rolls, too.

I mean, I HAD to. We live in Nebraska. 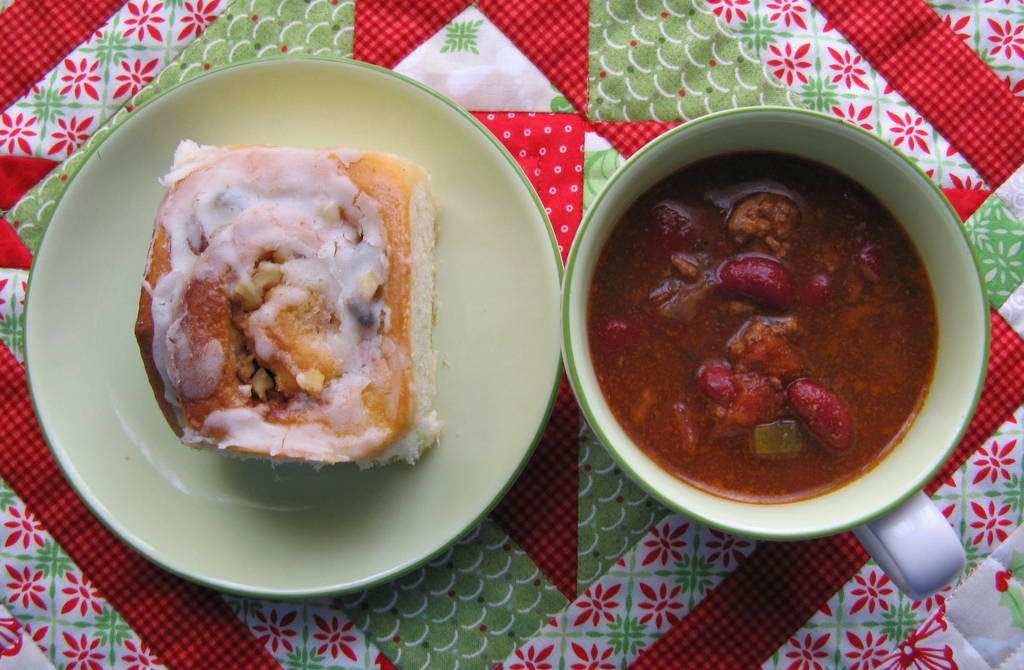 It's actually a very tasty combination, nothing like my mother's pairing of liver and onions with spinach. That was a meal my father had grown up eating, and he asked Mom to cook it fairly regularly. When we frowned at our plates, he'd say, "Eat healthy food or go hungry". We ate.

I used a Paula Deen recipe for the cinnamon rolls. Decadent, but oh, so yummy. There was only one minor little hitch. The recipe says to allow 1 to 1 1/2 hours for the first rising and about 30 minutes for the second rising. I had to triple those times to get the dough to double! I used quick rising yeast and placed the dough in a warm oven, too. I have no idea what the problem was. I wonder if I need a new batch of yeast. I had almost given up hope, but thank goodness, the dough did rise eventually. I was so glad I'd started early in the morning!

Back to the chili.

My recipe is really basic. There aren't many essential ingredients, and I pretty much toss everything into a pot without much measuring. When I was young and just learning how to cook, I followed my mother's recipe faithfully right down to the last 1/2 teaspoon of pepper. But that was more than 50 years ago.

Baking requires exact measurements, but other foods not so much. My toss-it-together chili varies a bit from time to time depending on what ingredients I have available. This time there was no need for substitutions.

1 large onion, chopped
2 cloves garlic, minced
3 or 4 baby carrots, grated
1 green pepper, chopped
1 T olive oil
1 lb. ground beef or ground turkey
2 T dried parsley
1 8 oz. can of tomato sauce
2 16 oz. cans of diced tomatoes
3 cups of water (more or less depending on how thick you like your chili)
1 1/2 tsp chili powder (more or less depending on how spicy you like your chili)
Salt and pepper to taste
2 16 oz. cans of dark red kidney beans

Saute the chopped onions it the olive oil until golden. Add the minced garlic, grated carrots, and chopped green pepper. Stir and fry a couple of minutes more until the garlic starts to brown. Toss this mix into a crock pot. Brown the ground beef in the same pan.

If the crockpot is set on low, the chili can simmer all day.

I don't like to add the kidney beans until about an hour before we plan to eat. If they are added too early they can get mushy.

As the chili simmered and the cinnamon rolls rose (ever so slowly) I finished the stitching on my mug rug. Everything on my list was complete.

Dinner is over now and the kitchen is cleaned. I didn't even have time to think about the weather!

It's been a fairly busy day, so I'm planning a very relaxed evening.

I'm going to lean back in my recliner, pull my "Snowball Fight" quilt over my lap, and read on in my book until it's time for bed. 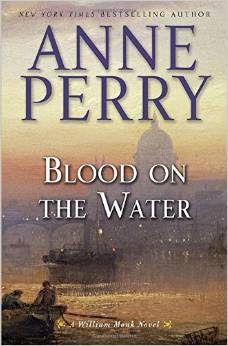 Wishing you all a lovely evening!