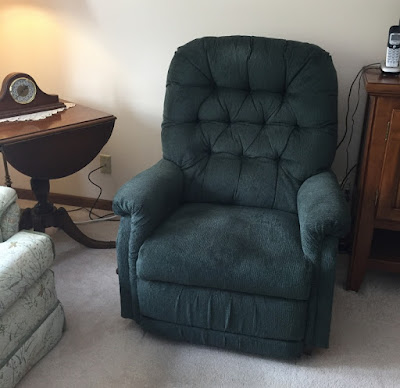 I came home from grocery shopping today, and I almost called out, "I'm home!" Almost, but I stopped myself. There was no one to call back a greeting.

My husband passed away in January. His squeaky green recliner sits empty, and my house is silent. I miss him every day, all day. Tears come unexpectedly, like they did this morning while I put  groceries for one in the refrigerator.

I want to tell our story, but it will come in bits and pieces, and not in any sensible order. This is the story of his last gift for me.

Fred had been unwell for several years. Over time, in addition to diabetes, he had developed the neurological and mental symptoms of Parkinson's disease. Dementia was creeping up on him, and he shuffled with tiny, exhausting steps that made going anywhere very difficult.

In October, he had emergency surgery for a kidney stone. He was so frail, that he never really recovered. In spite of it all, he remained the same kind and loving man that he had always been.

Four days before Christmas, Fred decided that he wanted to go to Von Maur to buy me a Christmas gift.  He'd only left the house a few times since last October, but he said that he felt a bit stronger that morning. I tried to convince him that a gift wasn't at all necessary, but he insisted. He was dressed and ready to leave at 10:00 A.M. The  department store is only a mile and a half from our house, so we wouldn't need much time.

When Fred was all buckled up, I began backing out of our driveway. The back of my car had barely reached the street when there we felt a jolt and heard a sickening thump. The neighbor, whose driveway was directly across the street from ours, had come zooming out like she always did. This time, she'd rammed right into the back of our car.

We both got out of our cars to see the damage. My bumper had a big, cracked dent, and her car looked even worse. The woman seemed panicked. She said she hadn't even seen a car in my driveway, then she began frantically texting someone on her phone. My man was waiting, and he was my first priority. If he wanted to go to Von Maur, I would get him there as soon as I could.

I told the neighbor, "Look, you didn't see me, and I didn't see you. It was just a freakish accident, so let's each take care of our own damage." She continued texting, and then ran into her house without responding. We left. Fred had shopping to do.

When we walked through the big doors, Fred looked around the store. "It's all clothes," he said. He seemed disappointed.  "Don't they have any jewelry?"

They do carry a small selection of jewelry. It was in the middle of the store, so we made our way down the long, center aisle.  We found the jewelry, but except for a few tiny chains, nothing was actual gold. Fred was disappointed. Costume jewelry wouldn't do.  He looked around the store again in search of something else.  "A sweater?" I suggested. "I can always use a new sweater."

"Not clothes," he said. After a moment of thought, he asked, "Do they have perfume?"

The perfume was a bit farther down the same aisle, so we shuffled on. Fred was only interested in one fragrance, Chanel #5. It had always been his favorite, and he purchased a small bottle of it. The sales clerk couldn't help but smile at this sweet, old man buying a special Christmas gift for his wife.

He carried the bag in one hand and held my hand with the other. As we made our way back through the store and to the car, he shook his head, "I'm just like a little boy with his mommy."

Once home, he handed the bag to me and asked me to put it under the tree. On Christmas morning, our whole family came to spend the day. We gathered around the tree to open gifts. When I was handed his little bag from Von Maur, I pretended to be completely surprised. Fred laughed and made a joke about his beautiful gift wrapping. Christmas was such a happy day. Fred told stories of his youth in the afternoon, and, in the evening, we shared our traditional spaghetti dinner.  It was my hubby's last good day.

The perfume is still unopened. I can't bring myself to break the seal quite yet, but I don't know why. I'll get there eventually, but not today. 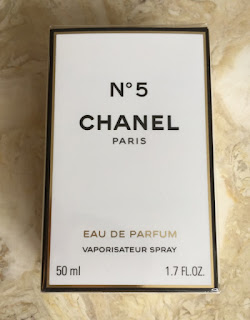