Marathon Sewing and the One Day Tote

Shelley came over last Friday to sew a tote with me.  She quilts a lot, but she only makes totes at my house. Shelley is too young to retire, so getting together outside of school doesn't happen easily during the school year. Friday, though, was the last day of spring break in Lincoln and, miraculously, neither of us had other commitments.

We thought the sewing would take two days, but we pushed right on through and finished the tote in one session.  We started just after 10:00 in the morning and, with only a short break for lunch, we worked almost constantly until 5:00 in the afternoon. What a crazy marathon!

Shelley's a cat person, but she chose a puppy print. Once upon a time, her mother had a dearly loved Boston Terrier. The fabric reminds Shelley of her mother. She paired the black and white terriers on a teal background with hot pink polka dots. Love, love, love the pink! It really adds pop to the tote. 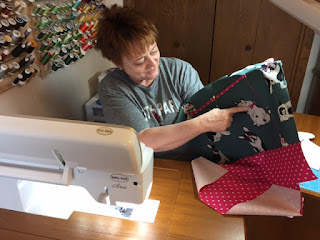 Shelley didn't have a pattern or even a photo. She wasn't sure what she wanted, except that the tote had to be big with pockets inside and outside. Oh, and no zippers. She hates sewing zippers.

I've made so many totes and purses, that I usually just design as I go. This time, though, it didn't go quite so smoothly. Conversation and concentration don't really go hand in hand. Bleeding doesn't aid concentration, either.

A primary rule of quilting is, "Always slide the guard over the blade of your rotary cutter when you aren't cutting fabric."  You know where this is going, don't you? Shelley forgot the rule, and nicked her thumb with that razor sharp blade. It wasn't deep, and I should have taken a photo, but I was too busy chasing up the stairs for a band-aid while yelling, "Don't bleed on the fabric!".

We didn't have a pattern, so there was no list of steps to follow. I got a couple of steps out of order. It was all Shelley's fault, of course.  Some of those steps were pretty important, too! It's a good thing that I have more than one seam ripper.

Shelley did most of the sewing, but now and again, I helped out. While I was sewing the edge stitching on the pocket, my needle slipped off the edge along one entire side. More seam ripping. When the tote was completely finished, we discovered that I had cut the button loop at the top of the tote too short to go around a button. Just when I thought we were finished, the seam ripper was back at work. As I said - all Shelley's fault.

There was more. Shelley had eyeballed the amount if fabric she thought we'd need, and told the clerk to "cut it here". We were stuck with what we had, but we made it work. We ran a bit short, and we had to use pieces of both of her fabrics for the tote lining. There was pink gingham in my stash that lined the pockets. The interfacing also ran short, but I had plenty of that in my stash. Have I ever mentioned that I love my stash?

Look at all of those pockets!


I was watching the clock, and even as we neared the end, I was sure that we would need  one more sewing session. Then, as if by magic, the tote was done!