A Week of Lessons and Bean Soup 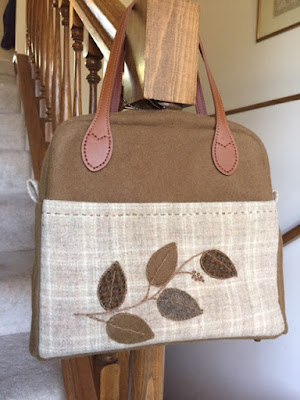 It did turn out to be just fine in the end, but oh, my goodness, what a headache! I knew the thickness of the seams would be a problem. Understatement of the year! After breaking three needles in a row, I switched over to a heavy duty denim needle and, when sewing the thickest seams, I resorted to turning the wheel on the sewing machine by hand.

I love the leather handles, but I needed three hands to sew them on. One hand was needed just to hold the leather in position so I could sew it. The other two hands were needed for the sewing. Since I was born with only two hands, I cheated. With a little squeeze from the glue gun my handles held quite nicely in place while I sewed them on. That worked out so well that I got the glue gun out again to simplify holding the plastic canvas in place on the base of the bag.

Lesson # 2: Some ideas are just a waste of time.
Three finished blocks are going into the "I'll find a place for these later." pile. I will find a place because I do like the blocks. For now, though, they can keep the other UFOs company. 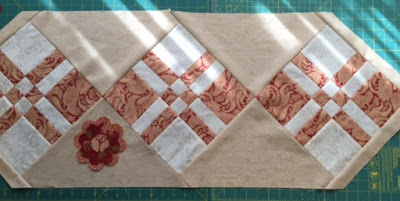 I spent three days working on this table runner. It wasn't so much the design as it was one of the fabrics I was trying to use. I did look for a different fabric for those large triangles, but I couldn't find anything, so I worked entirely from my stash.  I wanted to use up some of my collection of reproduction fabrics, and I succeeded - just not quite the way I had intended.  The blocks are great, but some of my fabric stash is going straight into the giveaway box. If I can't use it, I'd better let it go to someone who can. I'd rather have space for new fabrics than hang onto fabrics that I know I'll never get around to using.

Lesson #3: Check the food labels!
I had a sudden hankering for bean soup the other day. Normally, I would buy dried beans, soak them overnight, and cook them up the next day. Normally, I would use homemade chicken broth and a an old fashioned ham bone to make my soup. On the morning the hankering hit me, though, I was at the grocery store, and I really wanted this soup for lunch the same day. I had a long list and I was in a hurry, so I started grabbing ingredients as I chased through the aisles. One can of chicken broth, two cans of great northern beans. They don't carry ham bones? What has the world come to? I haven't bought a ham bone in at least two decades, but I was stunned that they don't carry them any more. So, then, a chunk of ham from the refrigerated area. I was in that section for eggs and yogurt anyway.

As soon as the groceries were put away at home, I got my soup started using the recipe I had learned from my grandmother. Before long, the kitchen was filled with the lovely aroma of an old-fashioned comfort food. When I tasted my soup to see how it was coming I almost gagged. Oh my goodness, but it was salty! I'd been in such a hurry at the store that I'd forgotten to check labels for salt. Nothing was salt free or low sodium, and the ham must have been the saltiest ham ever made.

The only remedy for excess salt that I know is to use potatoes to soak up some of it. So, I peeled several potatoes, quartered them, and dropped them into the pot with more water. Half an hour later I tasted again. Fortunately, the potatoes absorbed enough of the salt that the soup was quite edible. And, surprise! Potatoes in bean soup are yummy! I have a new recipe!


What's up for next week?
I have no idea, but I can't wait to find out! 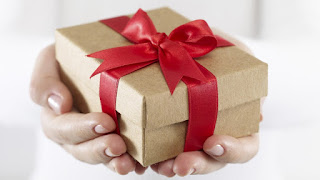 Wishing you a week of wonderful surprises!